Thanks to all for coming by and reading the DFRPG post yesterday. While it wasn’t my most successful post ever (that honor belongs to my post on shields last year), it was very well read, and I hope that encouraged you to poke around the site more.

Two things I wanted to touch on here before I leave this topic for a while.

In brief – the fact that the GURPS Basic Set was in the top earners for 2017, to me, indicates that one of the primary purposes for the game (the #1 purpose of course being to get a self-contained game out into folks’ hands to play) was actually accomplished. New people got into GURPS well enough that the Basic Set was on the list of top earners for the first time in a while that I can remember.

I suspect that many of those folks are branching out from the DFRPG, but of course I have no data there.

I’ll reiterate that I believe that there was no dissembling when internal delays and development costs were the issue, and that indeed, as a few commenters noted on my blog, the SJG Forums, and various social media groups . . . since all the numbers I crunched could not only have been crunched beforehand, they didn’t even really need the Kickstarter to crunch ’em, wasn’t the “failure” fore-ordained.

Not only is the answer “basically, yes,” but Steve himself said it:

It’s worth excerpting because it’s key. The visibility to this would have been high. They’d have crunched ’em before, during, and as they were about to go to print. Nothing about the status was hidden to them as things progressed. As cost and time overruns happened, “what success needs to look like” would have been updated too.

More Guesses on Volumes and Costs

The internal costs of development (one-time costs that spanned at LEAST 8-12 months of staff time, and likely more), overhead, art procurement, and the rest happened and were known fully when the decision was made to go to print. The marginal cost of production was also fully known and knowable when you place the print order. In fact, given that Phil noted that had they not reduced the order by 30% they’d have “thousands” of copies sitting around in the warehouse, one can guesstimate that that 30% was 2,000 to 4000 copies, which makes the intended order originally 6,000 to 10,000 copies. 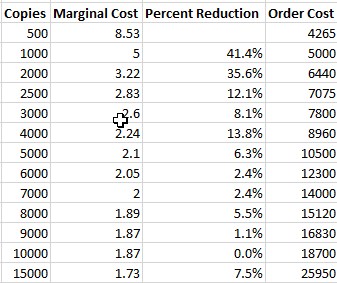 I’m betting closer to 6,000 than 10,000. If you do a thing on PrintNinja, you’ll see that the decline in marginal cost for a 128-page book stops being terribly interesting around 6,000 copies. While each company no doubt has its own price curve, if I were buying a bunch of books, and saw this, I’d basically tell myself that I’ll want to buy 2-3x what my Kickstarter backer numbers were (especially in today’s market) but I’d need to have a serious justification required to order more than 6,000 copies.

The Kickstarter had 1,500 or so backers, driving towards an order size of 3,000 to 5,000 books. And the double-digit reductions for increased order volume lie right in the middle of that field, at 4,000. Lower order size also limits the sunk cost total to fulfill the promises made (and SJG delivers on their commits, though sometimes late, they do come through).

Anyway, the point of that is the following. Once those costs are known, one can say let’s take the development costs that are (based on my prior article) in the $60-120K range and smear them over the 4,000 copies. Ooo. Amortized development costs are $15-30 per game, plus the roughly $10 cost of the materials itself. Revenue per game into distribution is $20-25.

Of course, the KS itself raised $110 per backer on the average, so some of those sunk development costs were offset, and the more folks that went in for pre-existing rewards that were mostly PDF based, the more that development cost was defrayed.

Still, there’s a lot of reduction required to have the first printing pay entirely for itself.

Well, if 4,000 copies makes the per-box development cost ridiculous, that needs to be spread out over multiple print runs, then, right? I mean, print 10,000 of them and you’re down to $6-12 per box, which even including cost of materials is looking like “breakeven or better.” And if KS basically acts as a down-payment on development, knocking off a big chunk of principal in your home mortgage before you even start making payments, so much the better!

Which brings me to sales velocity. A hard-nosed business type will be looking at a few possibilities here, after the KS sets themselves are mailed out.

One thing we could have seen, and what SJG was doubtless hoping for, was a runaway success. The KS effective brought in about 50 orders per day . . . and that rate could have continued or accelerated, as instead of individual orders, retail orders come in for several games at a time, from many places in the country. In that case, you might see that you’re looking at selling out the first print run very quickly, and you have a chunk of confirmed back-orders or pre-orders that mean you’re not even speculating about sales. Each extra copy divides the sunk costs and makes the entire line more profitable. This is a breakaway hit where you’re actually chasing your back-orders. That clearly didn’t happen, but the 5e Players Handbook went crazy-nuts in sales, and the numbers I’ve seen range from 150,000 copies per year to an upper end of 750,000 to over a million books. Not sure about that last one, but basically running through a print run per month is not crazy talk for a breakout RPG. Even 1/10 of that kind of volume (1,000 books per month) would go through three 4,000-book print runs per year.

We could also have seen a steady rate of sales that didn’t show acceleration, but also didn’t show a drop-off. The success of the line at that point would be based on the math of if the future value of the orders (with orders farther in the future being worth less, standard Net Present Value stuff) is making a good, appreciable dent in the total cost and profitability of the line. There would be a steady order rate above which you meet an internal rate of return threshold, and a rate at which you don’t.

That rate is fully knowable.

Or, you could get an order rate that, in the words of Andrew Hackard, looks like “half-dome,” referring to the famous mountain in Yosemite National Park. You get a nice spike in sales velocity, it tapers off . . . and boom. Zip. Zero. Zilch. Nada.

That’s the “one-and-done” model right there.

Note that the half-dome sales model is basically fatal to a product when looking to keep it evergreen. If the size of the dome is big enough, it might not preclude doing similar-but-different products, such as an Action release, Monster Hunters, or other genre treatments . . . but you have to do all that math ahead of time and figure out what kind of investment you can afford when you’re likely going to top out at 2,000-4,000 copies sold. $100-200,000 in total revenue for the game, of which if you’re still in the physical product distribution model you will see $40-80K of, less development and print costs.

But even the “steady orders, but not steady enough” is sufficient to say “sorry, not worth pumping in new money.”

So one can fairly easily see a clear path where with known development costs, one needs a certain sales velocity. Not getting it from word of mouth, the question would become “can we invest enough, or cannily, in marketing to create the required velocity.” If the answer is no then there’s not much else to do.

How to create buzz for RPG releases is the real trick, I presume, when you’re not WotC or Paizo or writing for those systems. A few folks can do it. Crawford. Raggi. And there are others, of course. Matt Colville is in the process of raising $1.2 million dollars against a $50K goal for Strongholds and Streaming, a Kickstarter that blends an actual 5e product (Strongholds and Followers, which brings the domain game to 5e much as Adventurer Conqueror King brought it to old-school play) with additional funding to livestream their games from a recording studio.

It may also be that if you’re NOT WotC/Paizo, the distribution model is simply unaffordable, and all of us looking at publishing RPGs had better adjust . . . and many already have.

What could be done? Anything?

Well, maybe. No one really expected a Serenity movie, but fans made it happen. Getting out there and blogging about it, livestreaming or publishing kick-butt DFRPG games, featuring the boxed set. Showing the game and building grass-roots interest. Effectively turning “Steady Orders” or “Half-Dome Blues” into a pre-existing back order list where folks are asking for the game at a rate and quantity that is unmistakably positive, if later than we’d like.

What will permanently kill it deader than a beheaded vampire is to simply drop the system and subsystem like a hot rock. Seeing “well, it failed” is disheartening, sure. But everyone from SJG to all the folks saying nice things about the games they’re actually playing (and that’s just one example). It’s a great game . . . it just went over budget on the front end.

As I’ve said before, we’ll see what the future holds, and not all may yet be written in stone.

So let me put a challenge out there: if you play a DFRPG, write it up and get it to a blogger. Might be yourself. Might be me. Might be Kyle at Dungeons on Automatic, who runs a really nifty generator. Build some buzz. If nothing else, such chatter helps the existing author pool figure out what to write next. And who knows what might happen otherwise.