Well, another month has come and gone, and what’s happened? More and less than one would think. I’ve been so head-down in doing the projects that my blogging and general evangelism has fallen off a bit.

Well, the book came out, well ahead of schedule, and in addition to those sales I made during the Kickstarter campaign (about 300), I moved about 24 more. Mostly PDF through DTRPG (15 sales there), and nine more – a healthy mix of print and PDF – personally and through my web store. I sold two copies of The Art of Dungeon Grappling, which is disappointing but perhaps unsurprising, despite the benefit to both charity and the artists.

The reviews have been very positive to date, so I can’t complain about that. Word will hopefully get out, especially as I broaden the applicability of the system and offer more products. Most folks probably just have been so burned with bad grappling in the past that they might not be interested. That was to be expected, I think – it’s a niche product. It’s a good product, but niche.

I will be running a few Dungeon Grappling Smackdown events at GenCon via the Independent Game Designer’s Network. More on that in coming months.

I also released Dungeon Grappling through CreateSpace. That was a bit of a chore, as I actually had to lay out the book again to meet Amazon’s margin requirements. But it’s available as both a softcover and a Kindle book (I’ve sold one Kindle version, and no CreateSpace print copies).

Looking over my blog, I see I’ve not said much about Dragon Heresy. Well, things are moving.

I turned in the first draft of the manuscript to Ken Hite. He gave me some feedback, and I am in the process of making revisions. Some races were removed. One was “too Tolkien” and not well supported in the myths and stories I was drawing from, and the other was always a tough sell given the culture of the lands. One of the character classes was just too tough a fit; so incongruous in the setting that it required some serious explanations. So that got broken down into feats and archetypes for two other classes instead. The dwarves’ history got toned down, and two new human kingdoms got added to my map in order to give my pseudo-vikings more options for raiding.

So things got a bit tighter. That was a theme of the revisions, actually – the game is a rules modification for greater narrative and mechanical power in combat, backed up by a tightly integrated set of story and worldbuilding. So those things that reinforced that premise got kept or amplified, and that which did not got the axe. I finished my primary revisions today, and I have two things to do: draft up some random encounter tables to let GMs wing it a bit more north of Audreyn’s Wall, and there are maybe a half-dozen optional rules that I’d identified as wanting to write that will fit into an alternate rules appendix at the end of The Book of Deeds.

We toyed with a complete revision of the magic system, and while I had some great ideas that I will certainly turn into their own supplement, keeping this SRD5.1-based game actually based on the SRD5.1 seemed key.

I have received several passes on the layout from Michael Clarke. It’s freaking gorgeous and I love it. To wit:

This first one is the chapter title page and a full-page of art. I might still change that left-hand art piece to really be a full 8.5×11 image, but there’s a reason right now that it’s not this way (and it’s not cost – both this version and the full-page art are paid the same: 100% of full-page art rates).  That little tab on the right of the border will bleed off the page and provide a color reference by chapter on the cut edges of the page. 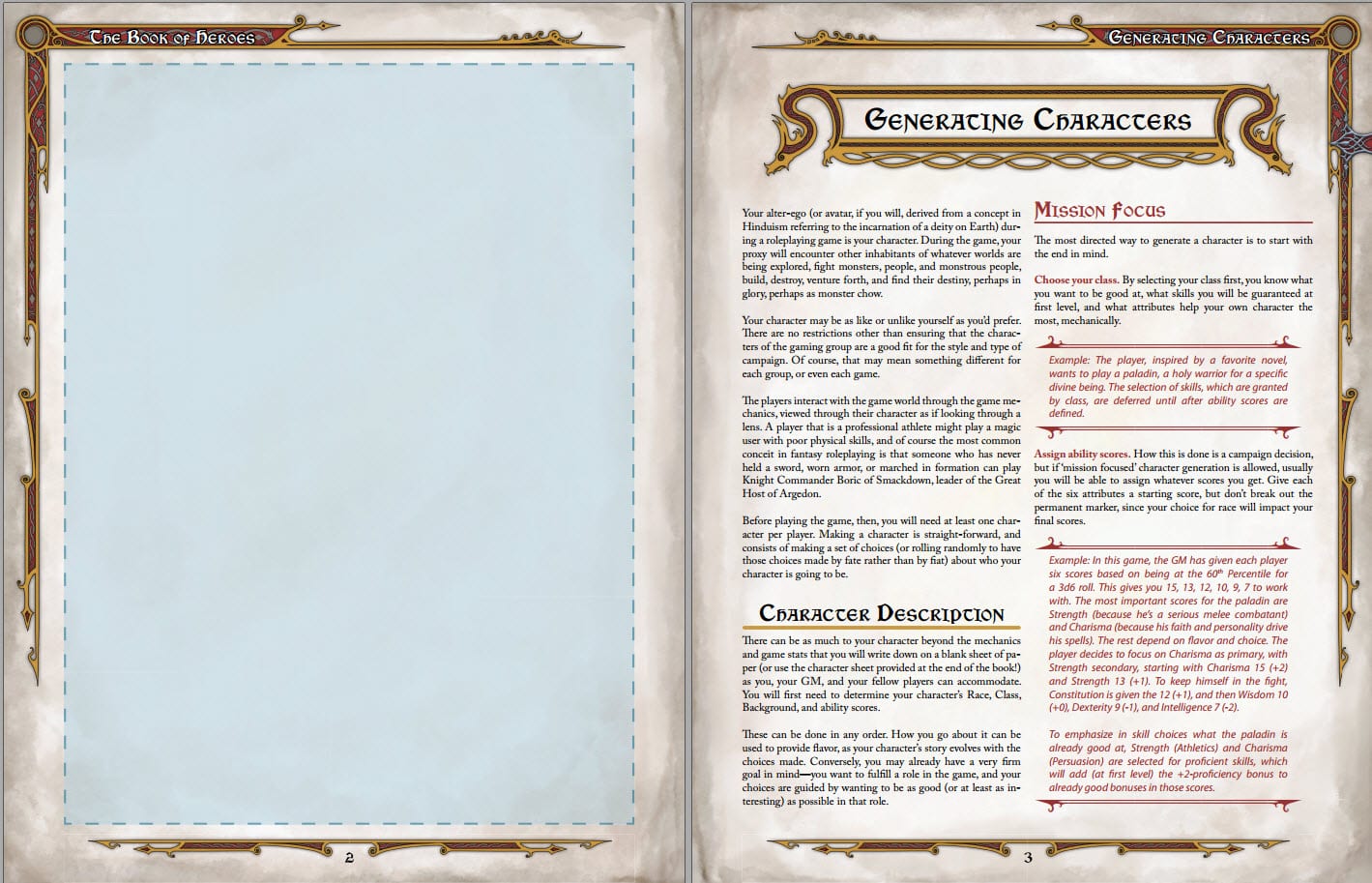 Here you see a spread for the Dragonborn, including a bit of family life. All five people in the image are dragonborn, and there’s tremendous variability in these half-human, half-dragon magically-created hybrids. 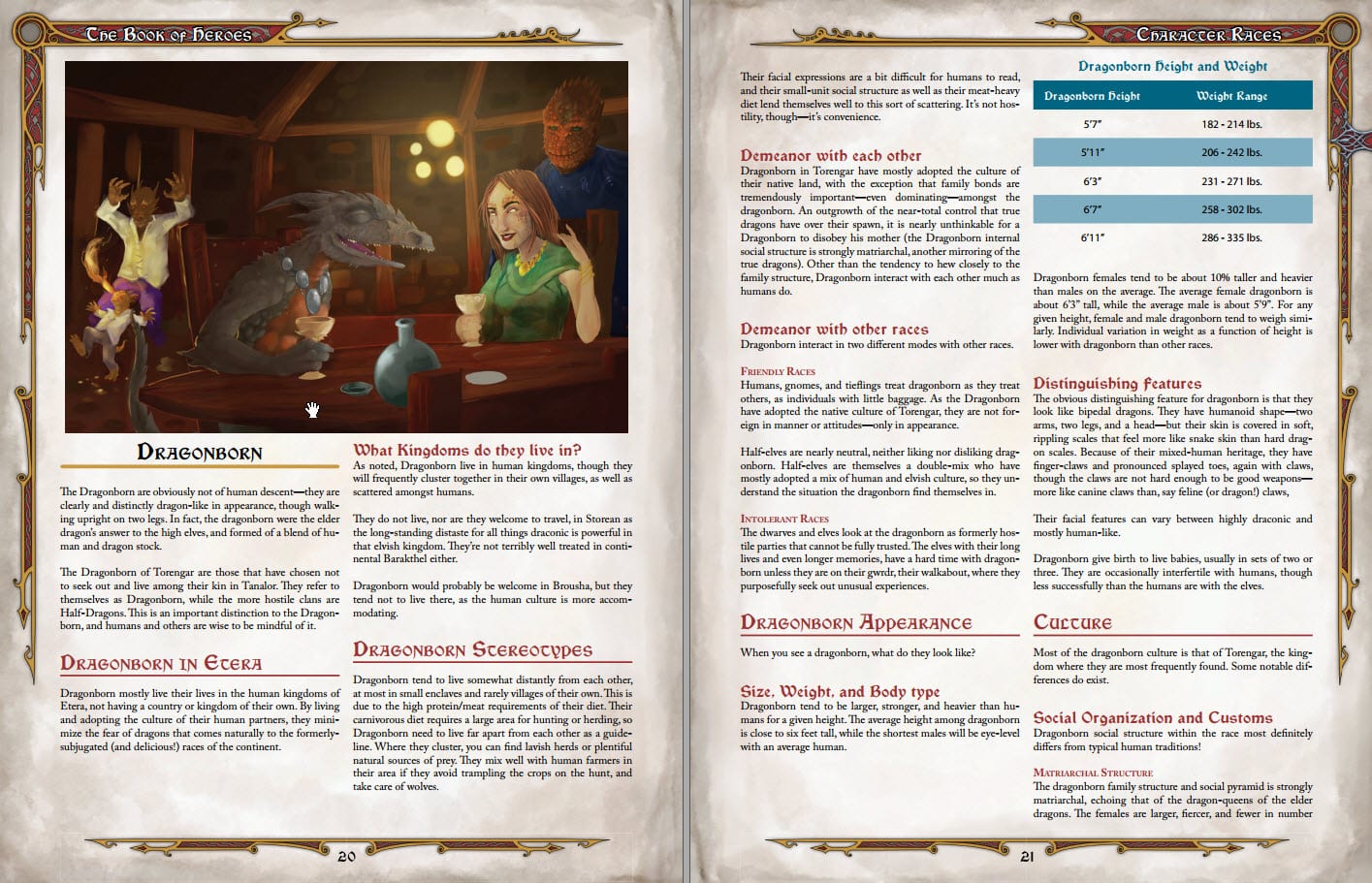 Finally, a bit on the dwarves, who are not, in my setting, short bearded scotsmen. 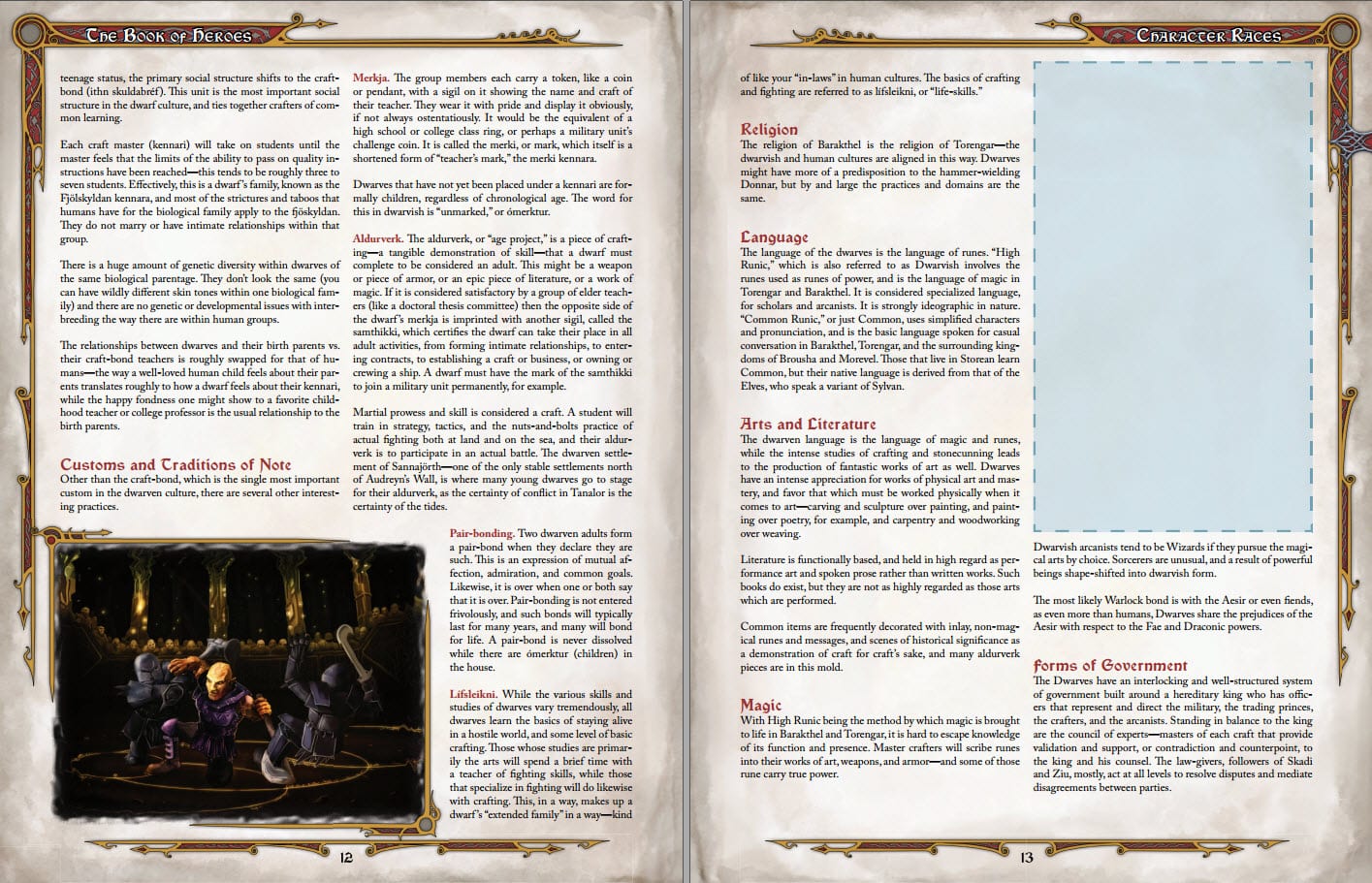 Don’t worry, sports fans, the background and art will be layered, to make for easy printing. But I couldn’t be happier with the look of the book, and though the art density is too high right now, this give a nice preview for what the final product will look like (unless we overshoot on the Kickstarter by a ton, in which case more art!)

I have been fairly active in recruiting artists to my cause for Dragon Heresy. I think I have 23 artists who have expressed interest in the project, and I now have sufficient artists on board to complete my budgeted allocation in the four or five months I want to take. I need to make sure I have the right amount of art and in the right places . . . but now I think I can actually get it done in a reasonable amount of time.

Once I have a final on-budget layout preview, I will start prepping the Kickstarter for real. You can see I have some initial art already provided by Juan Ochoa (and a few more pieces from Gennifer Bone that aren’t shown). This project will feel as real as it can, and should the worst happen, I could still pull together a no-art or public-domain art book based on the layout above and still have it be gorgeous. I don’t expect to do that, but I could.

One of the goals for the project is an offset print run, because frankly even though DTRPG can make a nice hardcover book, it’ll be $34 each for premium color (about half that for standard color). If we can hit the right stretch goal (that exact amount is a bit of TBD), I have a fantastic pair of potential printers lined up. It’ll be one of those things where if we hit the goal, everyone gets a higher quality book and the project gets a financial shot in the arm.

I suspect that given that we’re almost in March right now, that I won’t be looking at a final edited copy until the end of March, maybe Tax Day.  That would mean Kickstarter in April through mid-May, and then shooting to get the books into folks’ hands by Christmas. That’s not a formal time budget; just a likely bad guess.

There has also been tremendous movement on a project that still doesn’t have a name, but it does have an author, and it’s not me. This person has 150,000 words of fantastic adventure material ready to go. He’s creating a new game based on the best OGL rules concepts to make a starfaring mercantile game fun. I’ve contracted with Nathan for the layout, and I’m very pleased with the initial concepts. Here’s a peek: 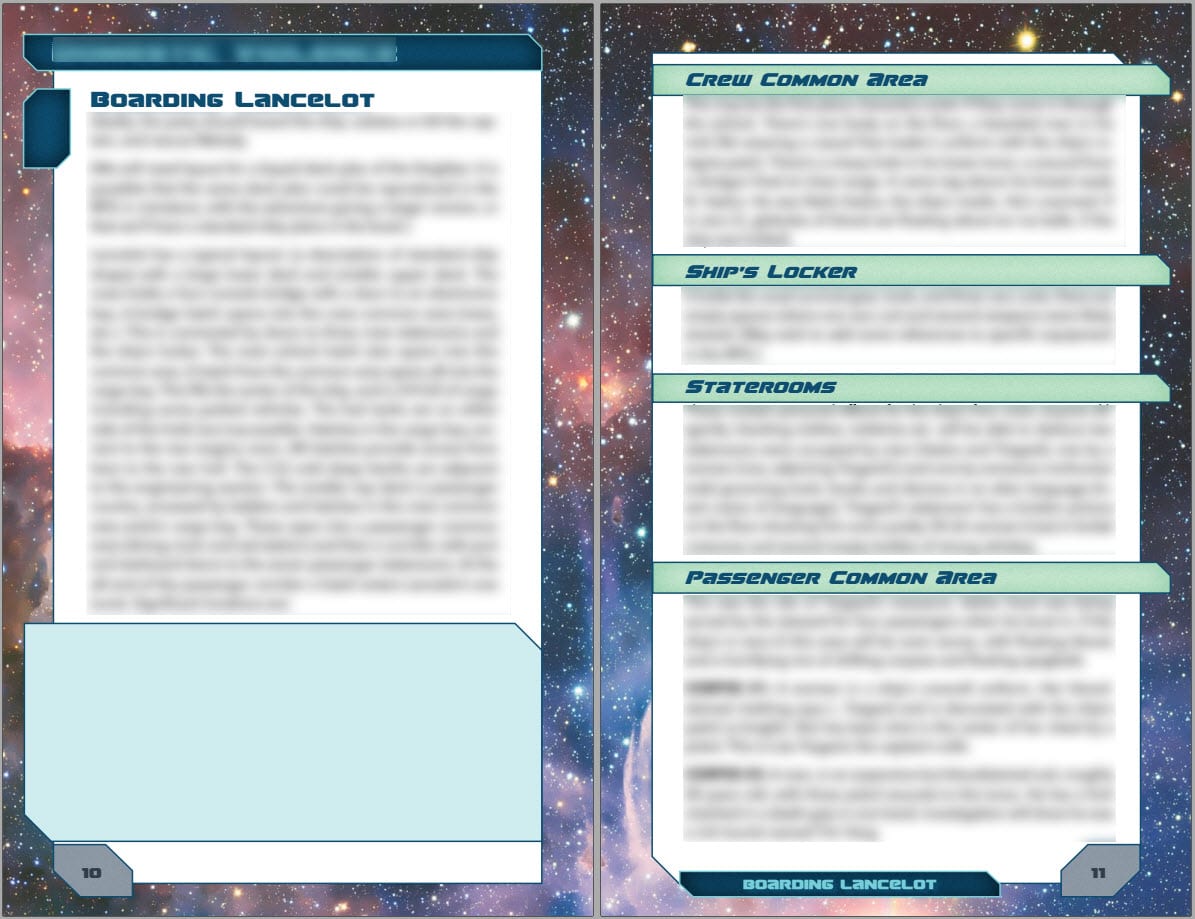 The overall format will be “digest size,” or 5.5 wide by 8.5 tall, and there’s cleanup to be done, and writing, and . . . but I’m very pleased with where this is heading, and it represents not just a product, but a whole product line. And yeah, the stuff is blurred out, because it’s very much still in flux . . . but it’s real, and it’s coming, and I’m excited about it.