Gaming Ballistic is pleased to announce that the Dragon Heresy Introductory Set will be coming to Kickstarter in April 2018.

Dragon Heresy is a Norse-inspired setting and supporting roleplaying game. It is built around a fantasy representation of the Nine Realms, where the Aesir, fae, dragons, and fiends all vie for control of Etera in the mortal realm of Midgard. The PCs are looking to become mighty heroes, and venture north into the ancient lands of the former demense of the Elder Dragons to find fame, fortune, glory, and magic.

It builds off of the excellent SRD5.1 game engine, but with adjustments and additions made to match the feel of the setting and provide more nuance to combat and struggle

The Dragon Heresy Introductory Set is a fully playable game, covering character creation, adventuring from Level 1-5, combat, gear, and challenges. In the book you will find:

The book will be approximately 256 pages, with major sections for

Read on for more details!

The writing is finished, as is a preliminary edit by the group of playtesters and collaborators that have been crafting the game for the better part of two years. The majority of the work on the game has been finished, including writing, playtesting, graphic design, and layout. Art assets have been procured during the game’s development: 20 piece, three full-spread covers, plus extensive appropriate art from the Dungeon Grappling and Lost Hall of Tyr products by Gaming Ballistic.

Dungeon Grappling came out of the original Dragon Heresy full manuscript, while Lost Hall of Tyr takes place in the land of Etera. Over 24 additional pieces of original artwork were crafted for those two books.

This allowed me to lay out and populate the Introductory Set to a near-final state. 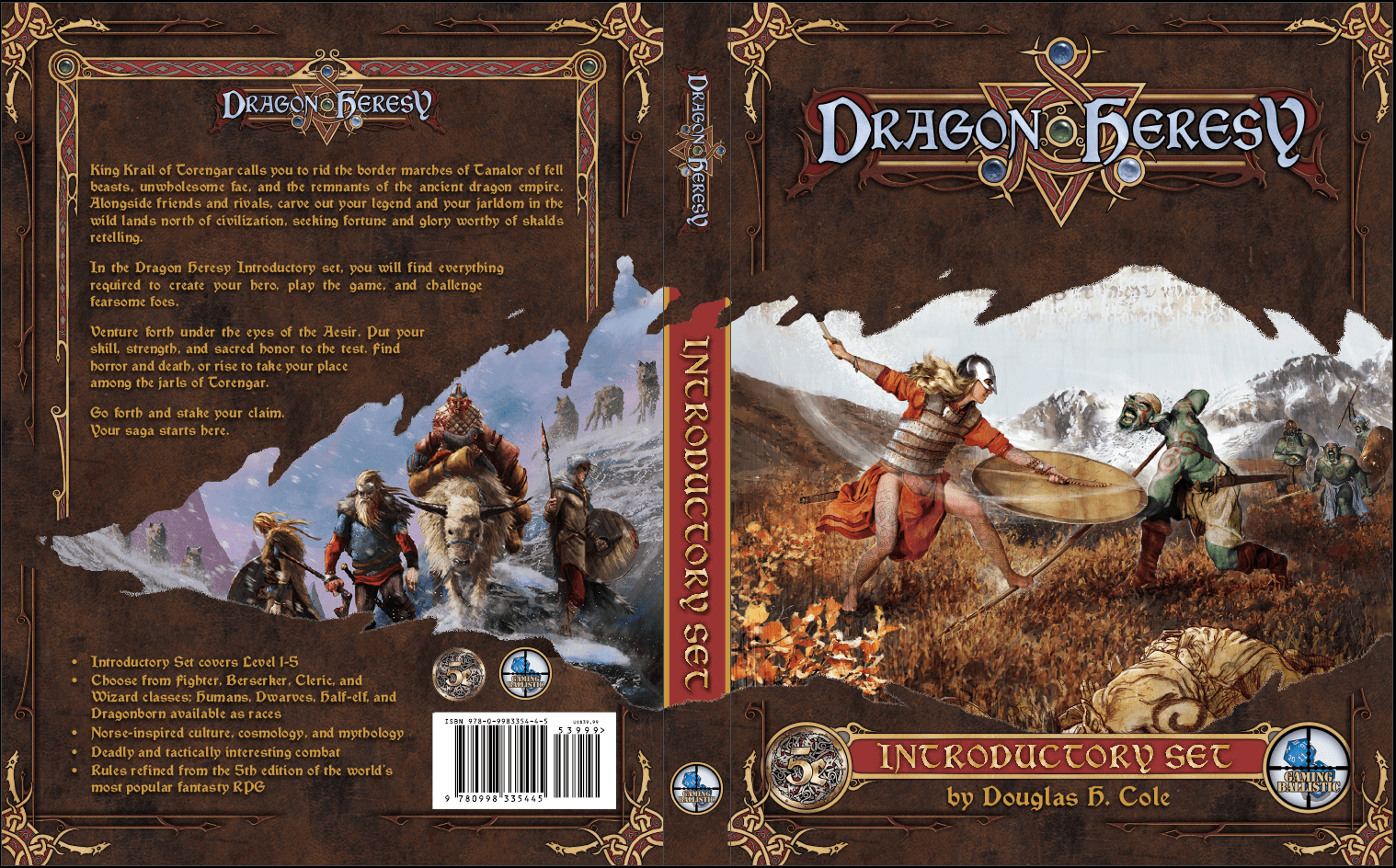 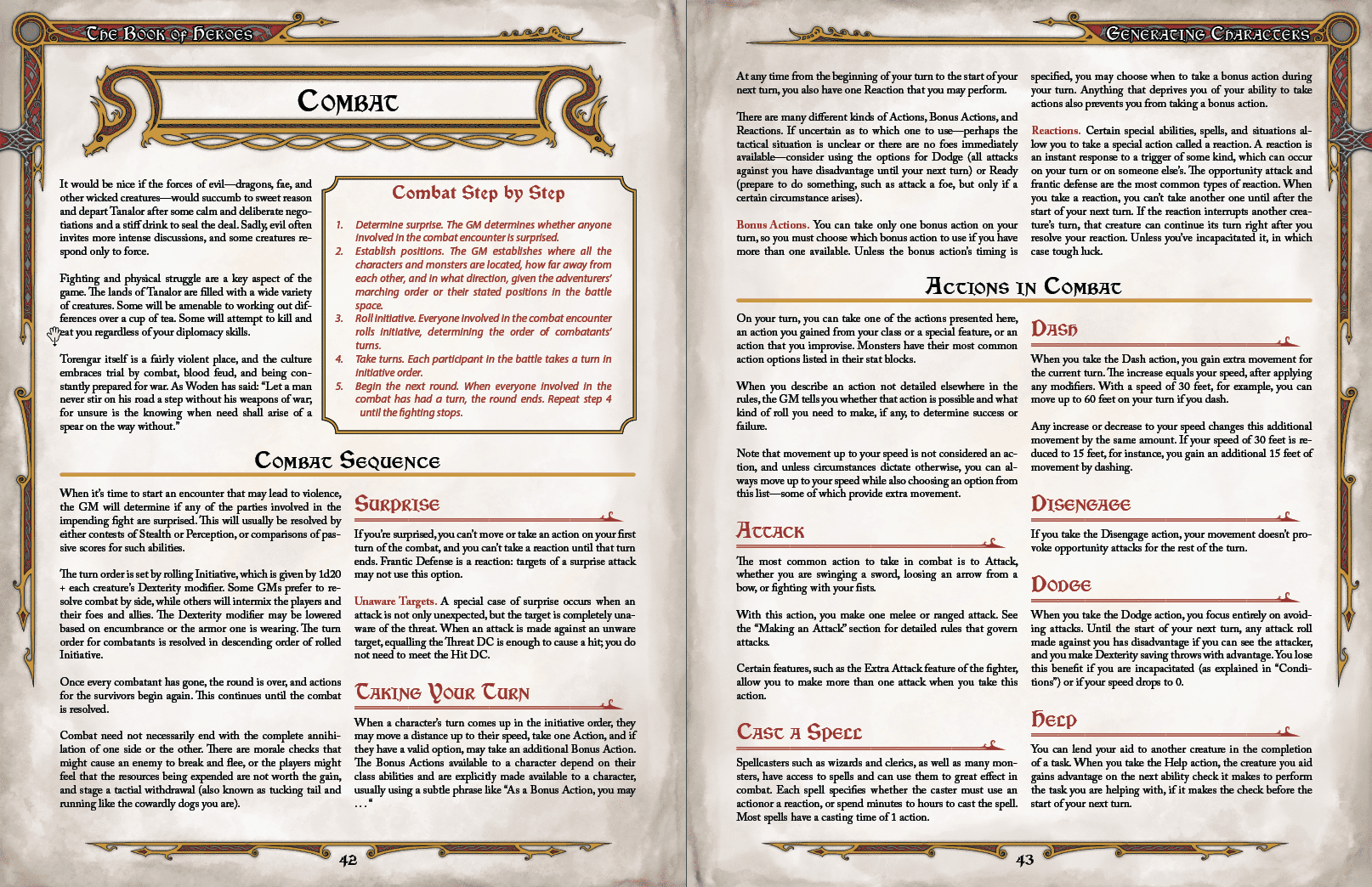 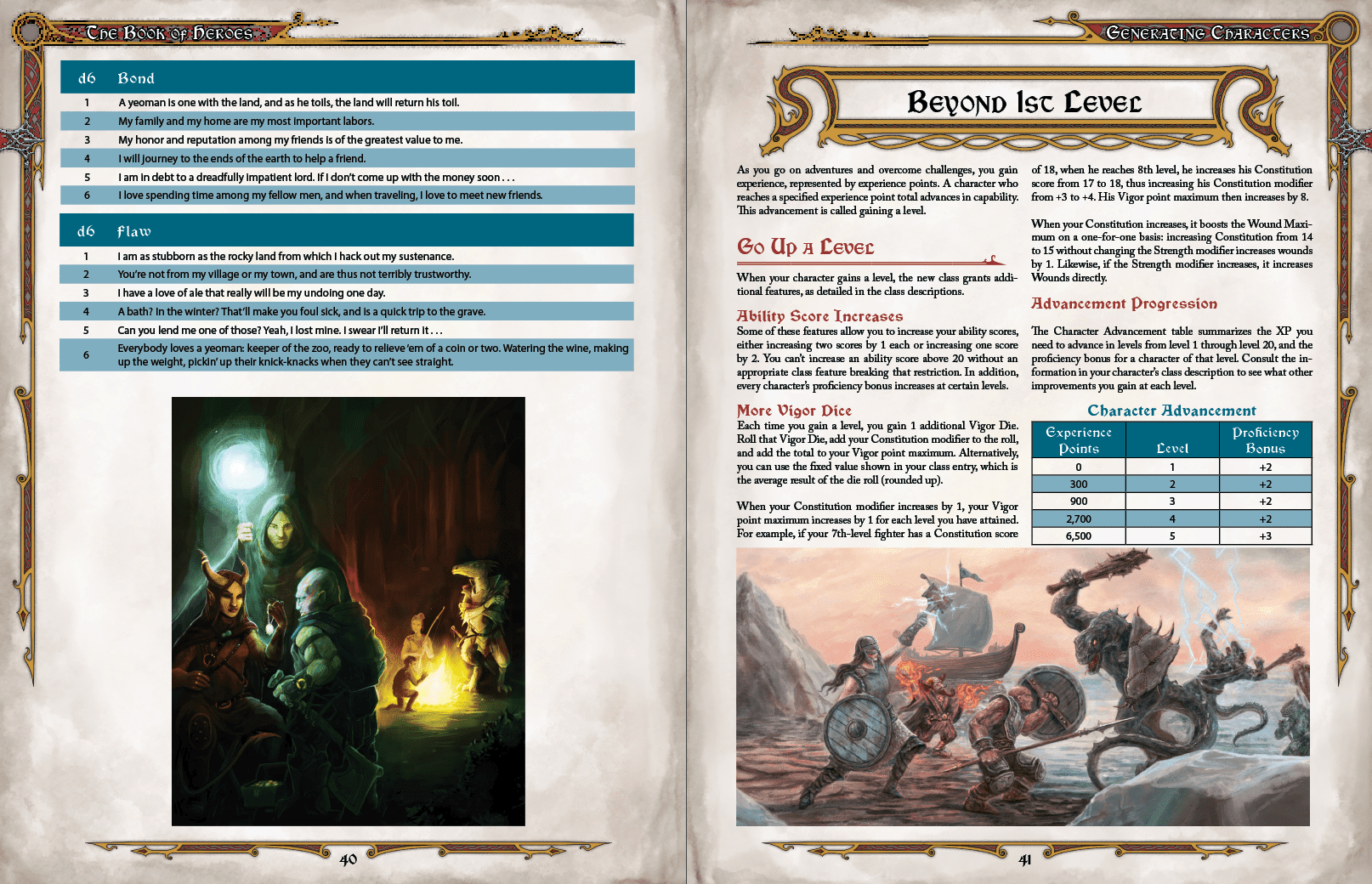 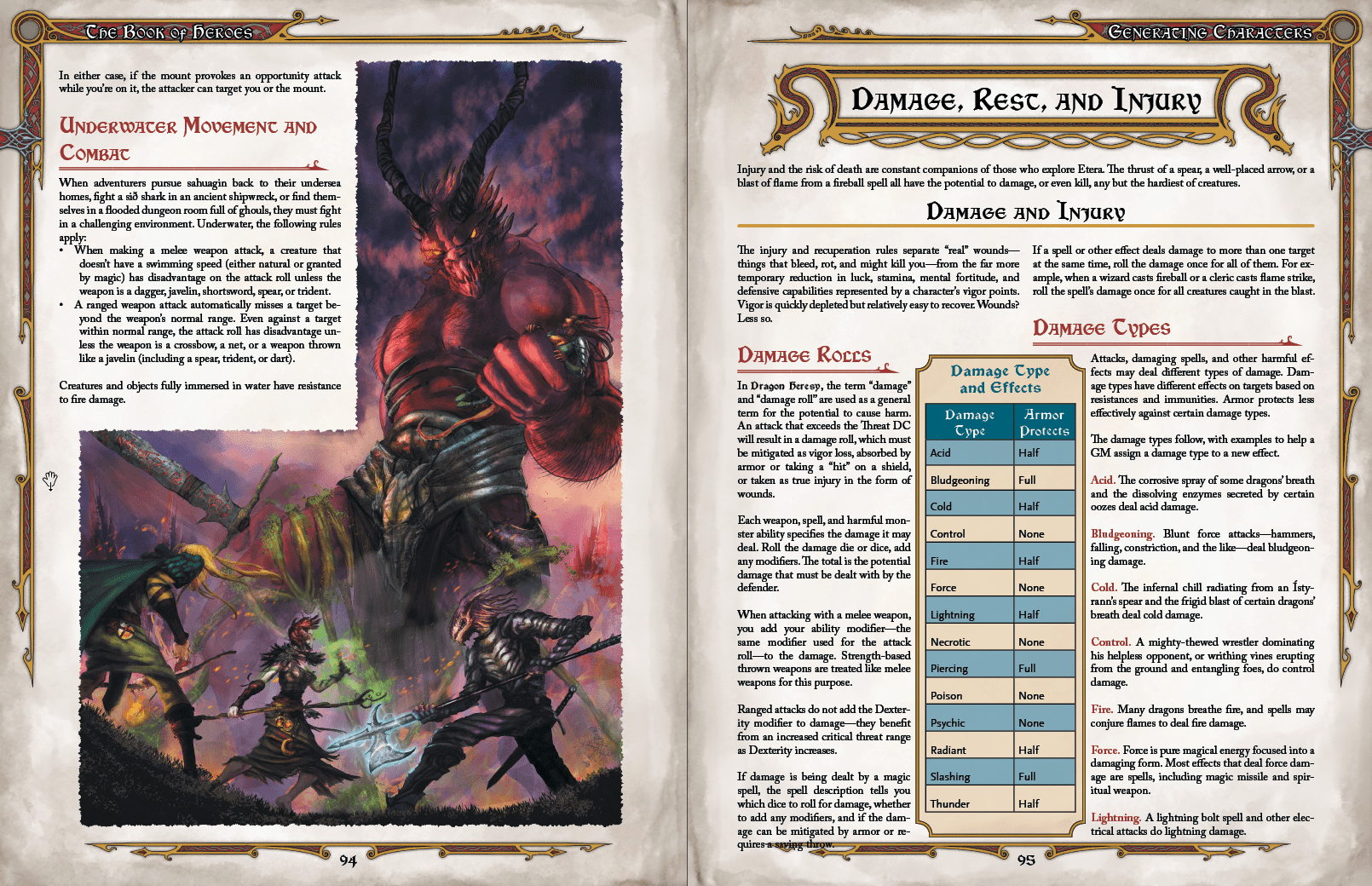 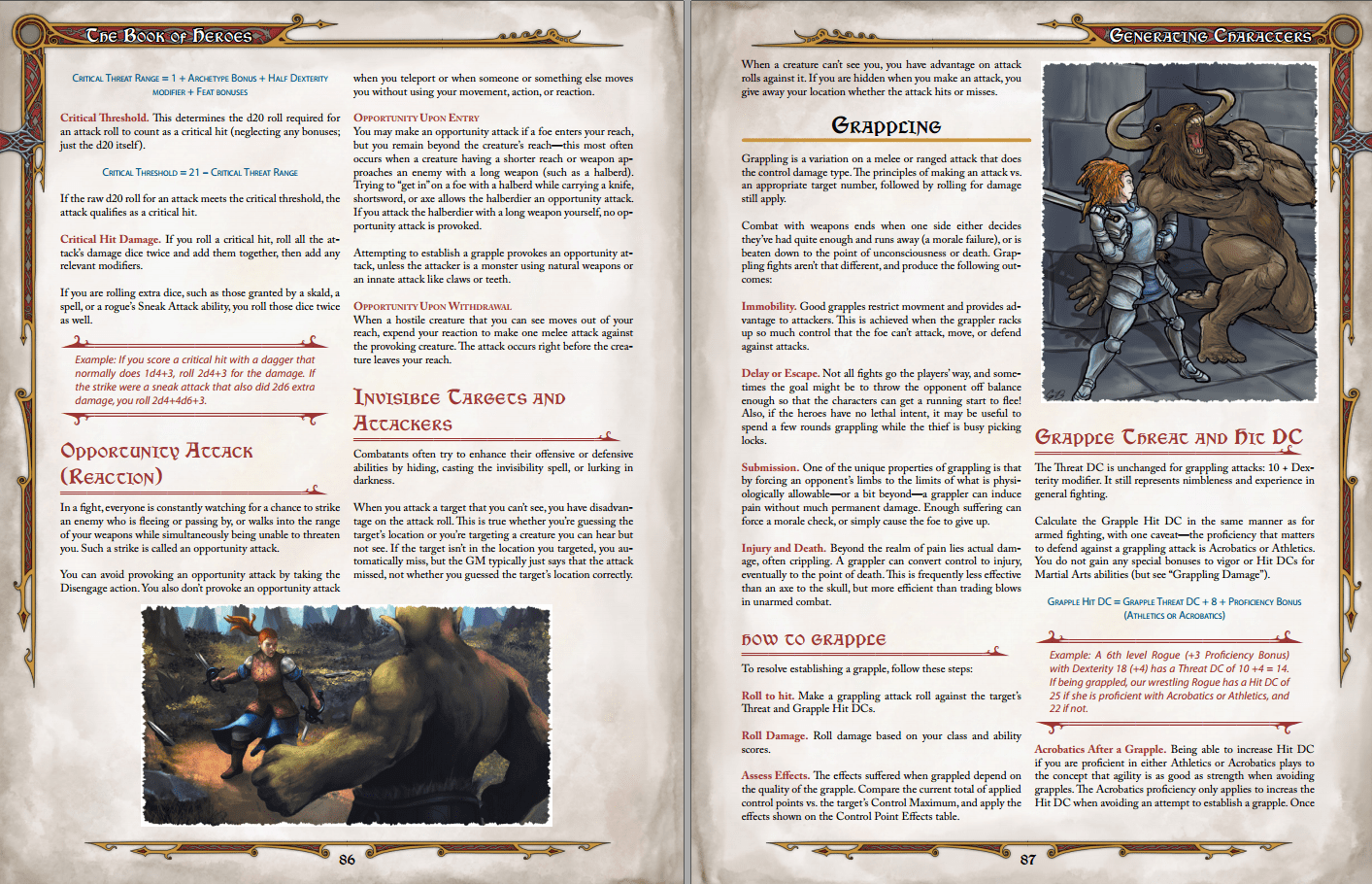 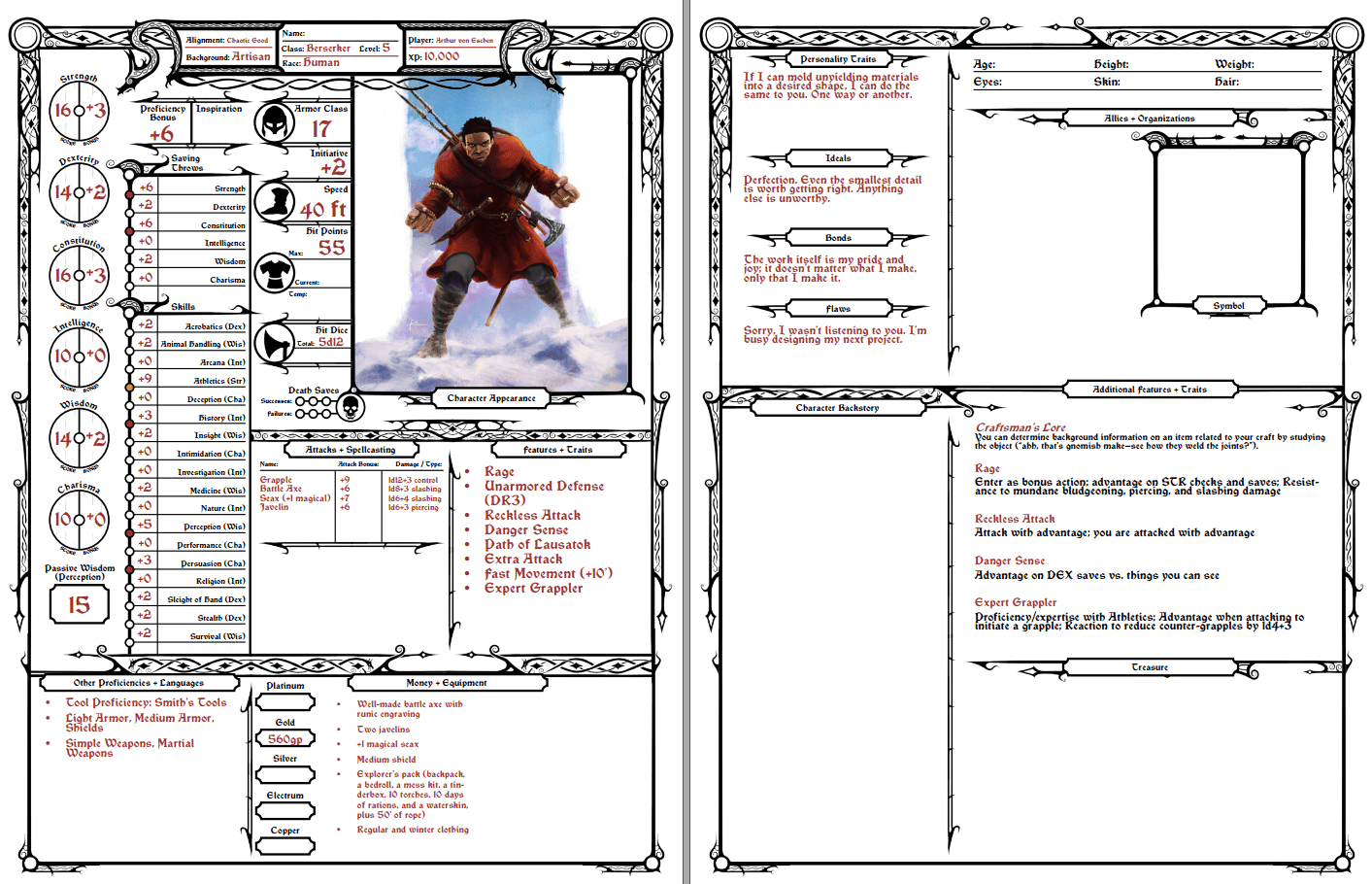 The Dragon Heresy project has been underway for the better part of two years, and substantial pre-investment has been made to bring the book to its current state. So what’s left?

That’s really it. Backers at the Berserker and higher levels ($5 and more) will receive preliminary, playable copies of their electronic files the day the Kickstarter funds settle.

I will have a stretch goal at $16,000 or 400 physical copies ordered where ALL US hardcopies are full-color, offset, with sewn binding. I’m always looking for opportunities to deliver a higher quality book than the usual POD offering.

There will also be a special consideration: I have a full three-volume deluxe set planned and written as well. The Deluxe Set has all playable classes and races, covers Level 1-20, with more backgrounds, more clerical domains, all the spells, more monsters, and a deeper exploration of Etera and the threats facing Torengar.

That set of books requires more like $75,000, which is a big lift no matter who you are (with limited exceptions). If you support at the $20 and higher level, the cost of your product ($20 for PDF, $50 or $75 for Print+PDF) will be credited towards a future Dragon Heresy Deluxe Set Kickstarter if (a) it happens, and (b) you back that as well. So there’s no risk of your content becoming obsolete or being required to buy it twice! That offer will be limited to Kickstarter backers only.

The project may be well along, but that doesn’t mean I don’t need help.

First and foremost, I need folks to spread the word. Share the blog post on social media, and point your friends at the Kickstarter page upon launch. Ask questions, joint the Gaming Ballistic Discord Channel, or sign up for my mailing list on the Gaming Ballistic blog so I can keep you informed of updates and product announcements.

Finally, if you host a podcast or do interviews about upcoming games . . . I’d love to be your guest!