Roland Warzecha has a new Patreon video out; it will likely be publicly available sooner or later. It was shot at the Berlin Buckler Bouts over the last few weeks. In it he emphasizes the similarities between weapons used in the off hand, and shields are definitely a weapon.

But in it, he really emphasizes how the motions you use with a center-gripped shield[1] are essentially the same training as with the primary-hand sword. “The shield-fighting is really no different than fighting with two weapons.”

So if you swapped out the shield for an axe or sword, there are only mild differences. Slight stuff due to the character and balance of the weapon.

But this is a gaming blog, so what does that mean for RPGs?

This suggests that a “one-handed weapon” skill with reasonable defaults would apply to swords, axes, and the use of the Shield (Buckler) skill. And that much of the training that at least we do (most of the stuff I learn is based on Roland and Arthur’s fighting style, obviously, as they’re our head instructors), we’re using the tools in a way where we more or less train “right-hand weapon,” and “left-hand weapon,” with emphasis on primary-hand sword, and secondary-hand shield, but it translates fairly well to sword-and-axe.

It does help that my own teachings emphasize symmetry of ability (OK, 50 cuts primary hand with the axe. Next, 50 cuts to the pell off-hand with the axe. Repeat for 2-4 angles of cut!). But really, what you’re doing, what works, etc is very similar.

In GURPS, at least, including most of its variants, there’s been recent discussion on a “Melee Weapon” Talent, with everything appropriate defaulting from that, in one way or another. I find this credible for most things (I find it less credible for knife-fighting, but that’s mostly because in my experience knives are utterly unforgiving and utterly quick, so it may be credible still, but at the extreme edge of penalties to be bought off). I mention that D&D handles this easily, and why it mattered recently, below.

In any case, there are some neat and subtle points in the video that I think lend some degree of support to reducing the number of skills. Much as Hans-Christian Vortisch published an article collapsing many Guns skills into “Guns (Longarm),” I think that at least for the right framing: “Reach 1 weapons,” or “1H Reach 1 Weapons” that such a thing fits in with two things:

More commentary and pictures below the break.

This particular take on weaponcraft (Roland’s) is well-informed but not the only one, so there’s that. He bases his stuff on well-researched fighting manuals, but is constantly re-creating and re-interpreting them for effectiveness. There’s also extrapolation to be done: there’s nothing in the Viking age that survives in terms of “how-to,” so one must take the last thing there’s pictures and instructions on, and connect the dots with the next thing (the European fighting manuals of the late middle ages and renaissance), move the dots around due to physical archaeology, and, well, “guess.” Or rather ‘hypothesize and then test with blunts and sharps,’ which is what Roland and Arthur do.

I think there’s something to this, and I’d recommend the video to those that can get access (or be patient, or look for some of his other stuff). I don’t have a rewrite or a new article all ready for this yet, but note that even from a pure mechanics standpoint, one of the things that came up recently in the Hall of Judgment games at GameHole Con was that the characters in play found a really nice magical sword, and were given a slightly-less-nice magical sword. So many swords.

But the pre-gens chosen were more axe guys. And so they were contemplating leaving the magic weapons behind because they couldn’t use them well. D&D, with the “simple” and “martial” weapon proficiency, doesn’t suffer from this problem. Find a nifty axe when you’ve got a mundane sword? Switch it out. No fuss.

The “One-Hand Weapon, Reach 1” talent would take care of this; sure, you might need to practice with it a bit to bring your skill up to your native level, but it’s “a point here, a point there, probably no more than 4-6 points for a Technique[2] total, not 4-6 skill levels which is basically “nah, I’d rather buy extra attack or just up my skill.”

In any case, the video and contents are what I’d consider an example in favor of the applicability of heavy defaulting between what GURPS considers dissimilar weapons, buying off those defaults with Techniques[2], or over-arching talents that cover many similar weapons.

Here are a few screen caps from the video to illustrate.

This is Roland entering in on his partner with two weapons. 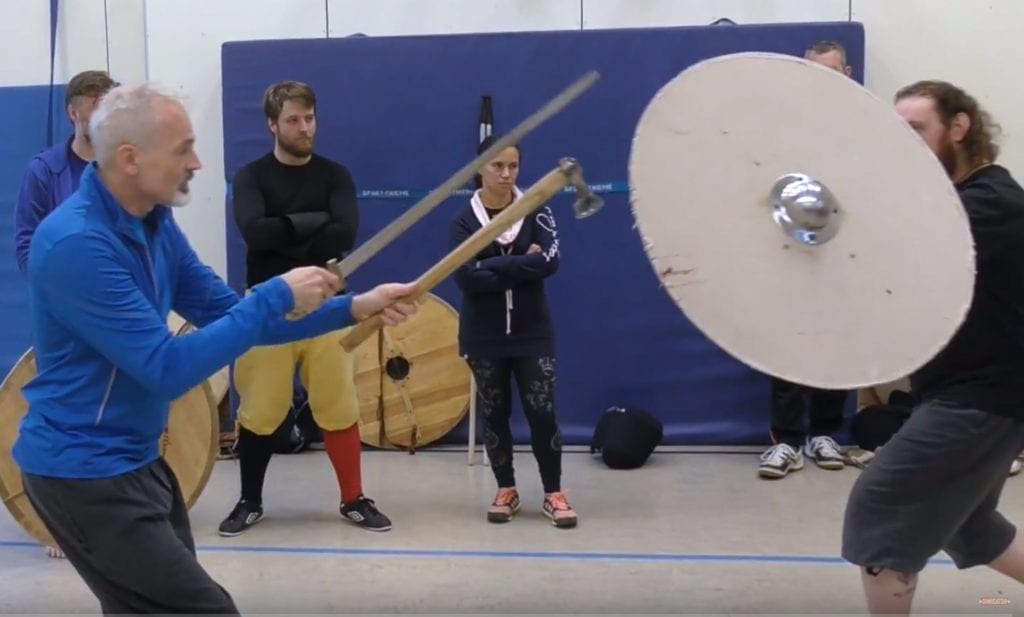 This is me entering in with weapon and shield, but note the basic similarity; my shield should possibly be higher, but this is also a clip from a video, so I’m likely responding to Dale. 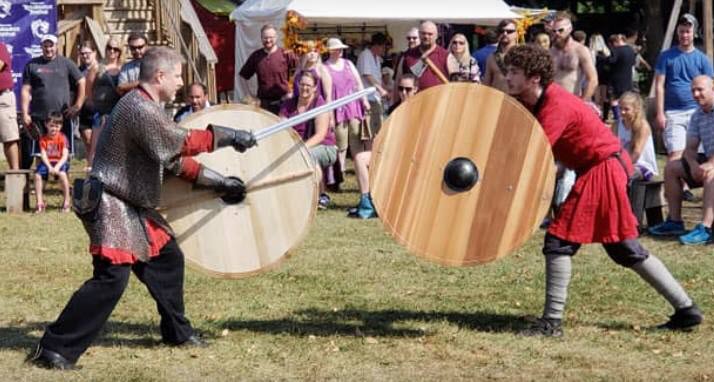 But the presentation of Roland’s axe and my shield (or Roland’s shield, here) 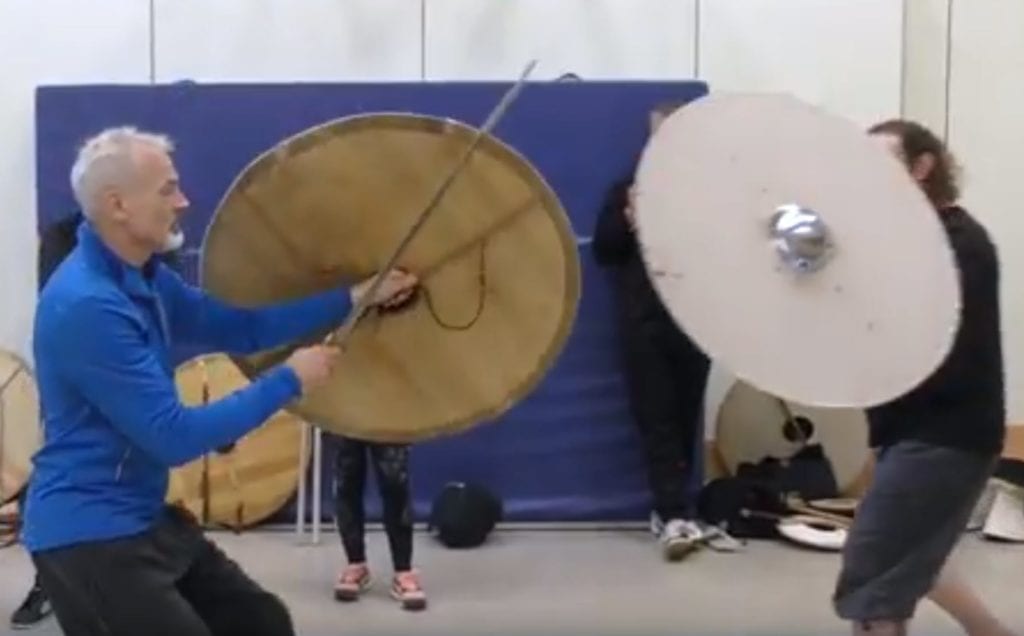 You really can see the posture and stance are very much the same.

Likewise, when he shows how to apply overbind pressure with his off-hand weapon – in this case from the top, with an axe: 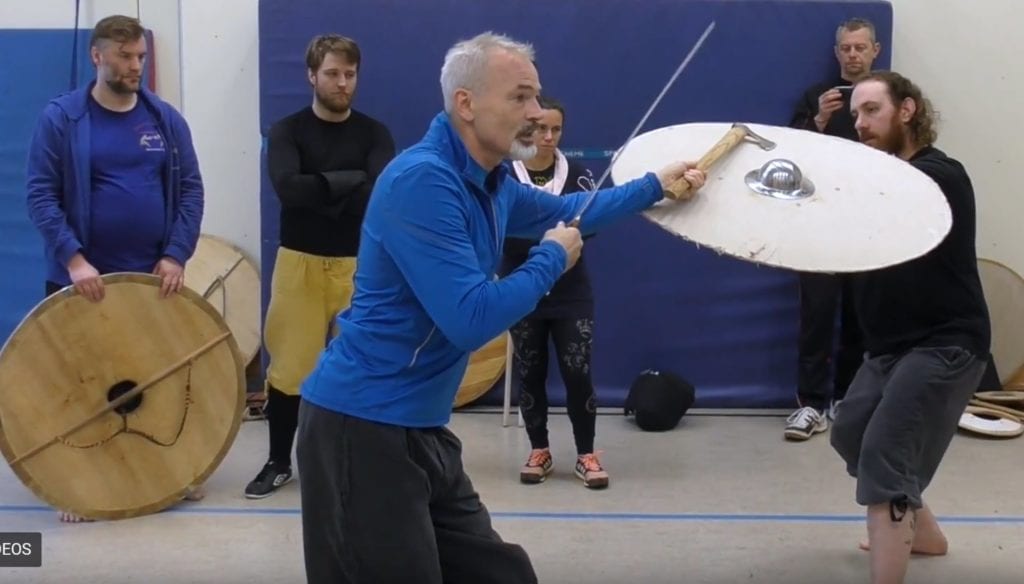 He then does very much the same thing with his shield: 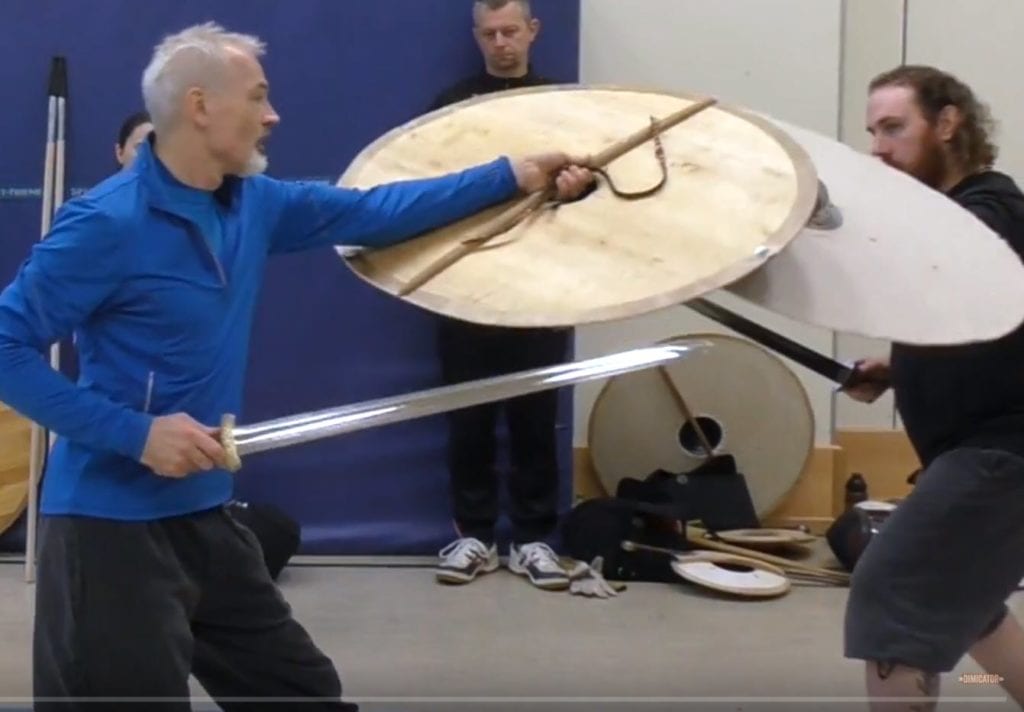 He does note that the (giant, comparatively) shield makes it much easier, because the “Defense Bonus” of the shield (AC bonus in D&D) deny so many lines to the attacker, something that’s really under-emphasized in most game mechanical treatments. In my own games, both of these moves are represented by a grappling attack to lower the ability of the defender to employ his shield – either lower Shield skill in GURPS, or lower AC or being attacked with advantage in D&D.

[1] I note from the video that Roland’s shield is very similar in construction to my new one. His handle is thinner. But it’s not stitched, it is hide-faced . . . and he seems to have the same “buckling/warping” problem I do with my new shield: you can see his handle is slightly curved toward the shield face, probably due to uneven absorption of moisture in the front and back hide facing. Somehow this makes me feel better.

[2] The Dungeon Fantasy RPG doesn’t have Techniques. What you would probably wind up doing in this case is doing it as a Power-Up. You’d choose a primary weapon (say, sword), and then for X points, which is probably 4-5, you get another weapon class up to full ability. That way, it’s still a conscious decision to switch up in play, you can trade (roughly) a point in overall skill with full familiarity with a second broad family of weapons during character creation, etc.

One thought on “Weapon Defaults, Sword and Shield, and Roland Warzecha”