Norðlond Sagas is coming to Kickstarter

Hall of Judgment was my first license from SJG, and you guys showed up strong. Then came the more recent Citadel at Nordvorn, and not only did you throw down for that, it also brought a second edition of Hall of Judgment with a much, much better printing, and a stand-alone booklet: Fantastic Dungeon Grappling.

We’re not going to string the products out for you this time. Gaming Ballistic is thrilled to announce that next week marks the launch of the Nordlond Sagas crowdfunding campaign on Kickstarter.

It will bring you three unique books, all written by new authors, and all set in the ever-expanding Nordlond setting. 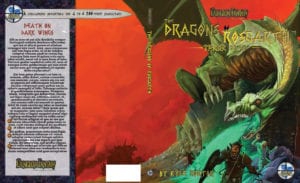 This setting expansion and adventure scenario details the towns of Midgard and Jarngarðr, and provides a looming threat worthy of a party of seasoned delvers. Targeted at four to six characters of 300 points or more. Written by Kyle Norton (Dungeons on Automatic).

The Ruins of Rosgarth are occupied again, this much is certain. But mining caravans and logging expeditions are being threatened by growing hordes of undead, as well as surging ranks of dragonkin. Wizards and clerics alike are muttering uneasily as they feel the disturbance in the land, and the Aesir whisper in the dreams of heroes. Journey into the wilds north of Audreyn’s Wall to Rosgarth Ruins. Investigate the source of the danger . . . and defeat it if you can.

The King proclaimed over a year ago that for the first time in centuries, the ranks of the nobility would be expanding, with lands available for those bold enough to hold them. The catch? The lands lay beyond Audreyn’s Wall, where dragonkin roam, giants dwell, and all manner of creatures make their lairs.

And yet, the Dragonground, as they are called, are home to countless ruins and dungeons, plus abandoned broken ley line junctions . . . and the boundless and magical wealth of the fallen empire of the Dragon Queens. One thegn, more than bold enough to take up the King’s challenge, built a fortified settlement near where the forest meets the sea: Skógaenda. . . Forest’s End.

A year has past, and the settlement has thrived. The thegn is ready to claim his rightful status as lord and jarl. A great feast is planned. What could go wrong? 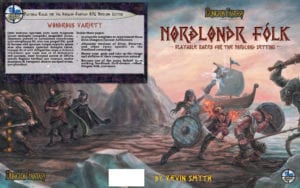 This short supplement brings at least 16 different playable racial templates to supplement those from Dungeon Fantasy Adventurers. Including Nordlond-specific versions of elves and dwarves, it also provides ties to other cosmology for the setting: dragon-blooded, children of humans and demons, and other hybrids, such as raven-folk and those who are brothers and sisters to bear and boar. With new traits available for every Dungeon Fantasy race, this book allows you to tie all of the “usual suspects” in with the Nordlond setting and bring some entirely new abilities to your games. Easily portable to other settings. Written by Kevin Smyth, who was deeply involved with writing and proofing the pre-generated characters from Hall of Judgment.

Depending on approval, the campaign will launch either Sept 10 or Sept 12 (next Tuesday or Thursday) and run through October 12.

It has an initial funding goal of $15,000, and two important stretch goals

The pledge levels are offered as a bundle including all three books. This is necessary for printing cost efficiency as well as to get the loyal DFRPG customers more stuff in 2019.

If you missed Hall of Judgment and Citadel at Nordvorn, there’s also both digital and physical tiers to get all the books, all at once. Plus two retail levels for those who would like to cover the line.