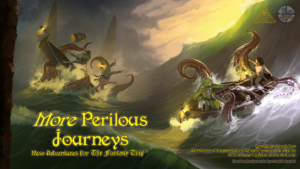 We’ll just get this out of the way fast. We’re only $391 away from funding the More Perilous Journeys kickstarter, with a week to go. Anywhere from two (retail level) to about 16 pledges, and if the average holds, it’s about seven. The project also has a record-breaking 632 followers, of whom 440 have not yet backed. We have 417 actual backers as well.

So this is looking pretty good for funding, and depending on how many of the following-but-not-backed come in, we could wind up anywhere from “barely squeaking by” to “record-setting Kickstarter for Gaming Ballistic,” and a dang good way to ring in my making a go of just being a publisher. Of course, I need your help to do that!

We need 205 of the 440 to come in in order to it be the most number of backers for the “regular session” of Kickstarter for a Gaming Ballistic project. I hope we get there!

Ksenia’s been working and working on the next cover. She sent me three versions, I got feedback via Discord groups (The Fantasy Trip and Gaming Ballistic servers), and got that off to her to help the next iteration. I frequently use those two servers to get pre-press feedback from folks, and interact with the customer base. So it’s a good place to find me and interact.

Here’s the WIP of the cover:

And here are the modifications we decided on:

I’ll also be improving the back cover text; I got some great input from David that makes for a really fun “hey, play me!” message that emphasizes just how different this is from other adventures.

Dark Lord’s Doom is very different. Inspired by books like the The Black Company, it’s an “epic” different programmed TFT adventure: a mini-campaign that follows a single squad of characters over the course of an entire war, with encounters including patrols, desperate holding actions, massed battle scenes, siege warfare, street and house-to-house fighting, and a confrontation with an evil dark lord. Your characters can go from being common soldiers to having the fate of the entire kingdom in your hands. Like all programmed adventures you can run it solo or with a GM acting as the adversary player, but it supports play with one to four players.

This can definitely be shortened and punched up for the back cover blurb, but hits the highlights of this solo. Squad of characters. Fight a war. Glenn Cook’s Black Company in feel. GM or solo. Good stuff!

I suspect that I’ll see an updated pencil sketch next, then rough color, then final. I’ll keep y’all posted.

and push it over the funding goal!