Skip to content
There’s a new bullet in town, and naturally things are all atwitter. What would the stats be if you did the new RIP bullets in GURPS?

It’s basically a solid copper bullet, with trochars that are designed to expand (like other hollow-point bullets like the Ranger SXT and other ‘petal’ style ammo). The difference lies in the solid copper construction (likely better penetration at the cost of about a 15% reduction in density) and that the trochars are designed to separate on contact with a fluid medium (flesh or water). This is supposed to increase the wound track.

My thoughts on this, after hitting the link (click the picture above) and watching both videos.

I scoffed at the “buzz saw” thing, then thought some more, and now I think I’m back to scoffing. The RPMs of bullets are quite high. A 1:12 twist at 350 m/s is roughly three spins per meter, or 1000-ish per second, or 60,000 rpm. Actually, that’s fast, but not that fast. Even so, the twist is still only one rotation in twelve INCHES, which means any buzz-saw effect is probably zero.

The best way to model these in GURPS:

* They’re hollow point bullets, maybe barrier blind. Everything else is sub-resolution. If the Facklerites are correct, this will not have sufficient wound trauma deep enough to reliably incapacitate (we’ll wait for real FBI and/or IWBA testing to be complete). If the Courtney-ites are right . . . I’m still not convinced, but maybe. If nothing else, getting shot with anything always sucks. 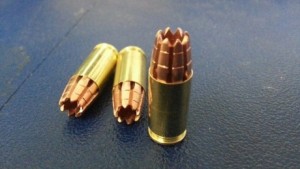 * More complicated: The fragment projectiles look to be something like 8-10 grains each, about 3mm in diameter and maybe 9mm long. This has, according to my calculator, has a wound channel modifier of somewhere between 0.13 and 0.21. I get about 1d-1 penetration for them, but this is an artifact of my model not being well calibrated for bullets smaller than about 4.5-5mm. Using my shotgun model, I’d probably model this as having an effective RoF on a hit of about 3. On a torso hit, roll 3d, where each 1d is the “did I hit the vitals” check: 1 or 2 hits the vitals with the 1d-1. Misses just get 1d-1 pi- to the torso. That makes the weighted average damage per fragment about 3.33, or about 10 points per hit. Max damage if you get lucky will be three vitals hits at 15 points each, but that’s very improbable. Overall, that’s not bad – typically slightly more effective than a solid 9mm ball, but with a very high upper end.

* I’m pretty well willing to believe that a solid copper pistol bullet of nearly any construction will have improved barrier performance. That’s the point.

My predisposition would be to treat it as 9mm barrier blind hollow point, and leave it at that. The more complicated treatment is probably too complicated and not terribly evidence-based at the moment.