In my search for a method of making training swords that have the right feel, I’ve tried a bunch of things. Laminating wood together, drilling out for rods, and a few different woods (oak, ash, hard maple). I have, perhaps, finally found a method that hits the right notes.

This is a second crafting-and-weapons related post for the day. Figured I’d get ’em out of my system.

The first cool thing was making weapons out of purely hard maple. This is a remarkable wood, with a hardness of 1450 on the Janka scale – nearly twice as hard as its softer relatives. It’s 10-30% more dense, depending on what particular variety of maple you’re dealing with, as well, as the soft maple. Relative to common red oak, it’s the same density (44 lbs per cubic foot) and 20% harder. Relative to (white) ash, used in baseball bats: white ash is 42 lbs per cubic foot, and 1320 on the Janka scale. Hickory? Yeah, while there are a bunch of woods mixed together and sold as generic “hickory,” the true hickory woods like shagbark hickory are 50 lbs per cubic foot and 1,880 Janka.

As a by-the-way, the Janka rating is how many pounds of force it takes to drive a spherical ball .444″ in diameter into wood to half it’s depth (full diameter, then). Why .444″? No idea.

Anyway, that’s why hickory is king of the axe handles. 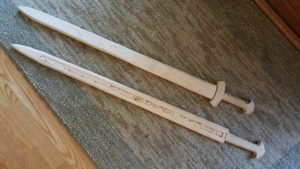 But two weapons are in discussion now. The first is my Training Sword Mk 5.

That one’s simply cut out of hard maple as a blank, rounded with a 3/8″ roundover bit, and sanded. The trick here was to see if I could carve a curved crossguard, for embellishment. Turns out I can. This sword masses about 550g, and has a 3.25″ grip for the pinch. I also cut the blade down from the model from about 30.5 inches down to 29″, which made it work better for my height. This one is now my personal training sword, mostly because of aesthetics.

The second was Training Sword Mk 6. This one was another laminate construction: 1/2″ ash core, with 1/8″ ash top and bottom pieces. I also embedded a 1/2 x 1 x 4″ piece of C360 brass near the base of the blade. That moved the center of balance about halfway between pure wood and an actual steel sword. The weight of the complete weapon is pushing 725g at the moment, and will increase a bit when I add a simple square cross-guard. The pommel could use more rounding; it cuts into the hand a bit. This particular sword is too big for me; it’s really designed for folks who are 6’2″ to 6’6″ in height. But the balance and pivot points are much closer to steel, while being roughly 75% the mass of an actual steel blade of the same dimensions.

Of course, I tried to get clever and carve a fuller into the second blade using a cove bit on my router. That . . . did not go well. I have an up-cut bit that went better (opposite side) and I know what I’ll do if I feel the need to embellish in that way in the future. In the meantime, it lets me show off the embedded brass. 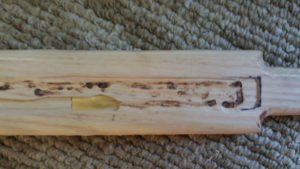 This makes it an excellent training tool to build grip strength and correct motion dynamics without having to worry about $1,000 custom swords. There are many Viking-style, or rather, Frankish-style swords; most are not built to historical weight and dimension, as their grips are too long and the weight is too high, or the balance isn’t quite right. My instructor is an expert weaponsmith, and makes his own; I’m sure there are some out there that are right . . . but their creators rightfully know that they are and charge accordingly.

Thus for both reasons of economy and safety, I want to make wooden swords of various sizes.

I have a couple ideas for Mk 7 and maybe Mk 8, but that’s going to involve a spreadsheet. In particular, I want to break a hypothetical sword down into “weight from balance point to blade tip,” which will also account for the size of the blade, and give a “weight per inch” in that region. Then the same for the blade from balance point to crossguard, then the crossguard and pommel, which are typically solid chunks of steel, and a bit for the handle (which will be done by subtraction, as the composition is tang+wood handle).

That will let me scale the weight down by 25%, figure out how much metal I need to add in each segment, and balance accordingly. This will allow me to custom-craft swords of different sizes, from a short blade that might be a child’s weapon, to the beefy blades I make above. I might also see if I can find a nice model for a long seax that might be fun.

This is more than just aesthetics. A properly balanced blade proxy will teach the right motions and muscle memory for casting blows and casting thrusts. It will have enough mass to build strength while not allowing motions that you can do with a 200-250g “magic wand” that is too thin and too light and can be used inappropriately during training.

So, once I get past GenCon, I will sit down and create my crafting spreadsheet, and having found a good method for building these things, I will start the process of making enough for the instructor cadre to work the hell out of. Once we all find them worthy . . . I’ll probably set about replacing the rest of the training wands with something that looks like a real sword. It’s both more useful and more satisfying to train with a weapon that looks like a weapon.