Did you Play Lost Hall at the Grappling Smackdown at GenCon?

I know a few folks – maybe one or two – who played what was called then “The Tower of Justice” or “Grappling Smackdown” with me in the IGDN booth at GenCon this year.

Friday and Saturday mornings, 10am start time. Each day was 7-8 people, some who’d signed up, some who didn’t.

As the book that will be now titled Lost Hall of Tyr: Dómstóllinn is closing in on its basic funding goal, I want to give you folks playtest credit. And a free copy.

So: email me! You have my card from the event. You can also hit me at gamingballisticllc@gmail.com, or leave a comment to this post. Let me know which game you attended, what character you played, the name you wish to be credited with, and the most memorable thing that happened to you during the game. 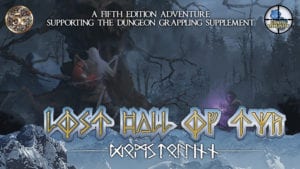