Unarmed combat is a bit of the bastard stepchild of D&D games, and deservedly so . . . at least relative to weapons. While a dagger does 1d4, at least in Fifth Edition (and therefore in Dragon Heresy), unarmed strikes do a single point of damage, modified by your Strength bonus. That can be non-trivial, of course: a strong unarmed blow by a STR 18-20 will do 5-6 points of damage, equivalent to a weaker person (STR 10) with a 1d10 weapon.

Monks, of course, subvert this with their martial arts damage: their strikes are weapons. Equivalent to daggers at low level, and versatile longswords at high. That’s cool. It also puts most of the focus where it should be: fists are, by and large, inferior weapons relative to purpose-built killing devices. Having an unarmed blow do 0-2 points of damage (1d3-1, for example) makes sense.

Problem is, that makes all combat lethal: why do only one point of base damage when you can do 2d6? Worse – from a reality perspective – is the concept of beating the snot out of someone with a fist or sword somehow being “non lethal” or “subdual” damage, where it doesn’t hurt much. One of the selling points of Dungeon Grappling is that it enables some quality unarmed combat, and interesting bar brawls that don’t have to be lethal. 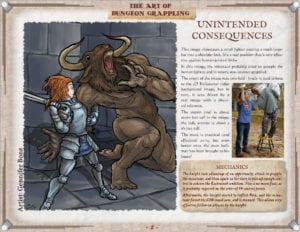 Reality aside: during the Tavern Chat last night, I got into a fun discussion with Smokestack Jones about the requirement for nonlethal unarmed combat in games. Especially cinematic fantasy games like D&D variants. A spot of fisticuffs in a bar, perhaps adding grappling, perhaps not, is a staple of the genre. Reality aside – and we’re talking elves and half-dragons and hobbits here, so yeah, reality aside – having entertaining unarmed combat is kinda important.

We compared a few other game mechanics. He mentioned one (whose name I forget) that used two tracks: wounds and bruises. Well. That reminded me of wounds and vigor from Dragon Heresy, but mechanically, vigor is all the defenses and luck and not getting hit that you do in a fight, not shrugging off blunt trauma and non-lethal blows.

We also talked about Champions/Hero System, where if you rolled a 6 on the dice, you took 2 body, 2-5 was 1, and 1 was none – so every STUN attack had a bit of a body component to it. That made all kinds of sense to both of us too.

I’ll mostly talk about this for Fifth Edition, as it’s what I’m most familiar with. I’ll refer to Swords & Wizardry as we go.

So let’s start with the mechanical basics for D&D type games. There’s an attack roll, a target number, and an effect roll. Based on similarities to my Rules for Grappling Rules, we want to use the exact same process that one uses for armed combat, so we don’t break the flow, things are simple, and everyone knows what’s going on without having special cases.

We will, however, see if we can adapt control points and Control Maximum to the task. For reasons. More on that later.

We’re going to roll 1d20 plus something. Bonuses require proficiency, so what are the options?

Pick the one that best fits your game.

For S&W, if you have familiarity with blunt weapons, you can punch and add your hit bonus to the attack, or just use the attack tables. That leaves out a few spellcasters, but those you’d expect to be fighty have “Any” or “All” as weapons allowed, so that works. If you can’t punch with proficiency, you are always treated as a 1st level character when punching.

There are only a few options here. Two, really:

So to hit with a punch, roll 1d20 plus your attack bonus if you have one. Target number is Armor Class.

Well, this is where it gets interesting. We want some non-lethal going on, but it should be possible to accidentally (or on purpose) hurt or kill someone.

With the addition of Dungeon Grappling, we have a control points pool going on. Your control maximum is based on your Strength primarily, which one can see as working. Hit points reflect Constitution bonuses; and honestly, constitution should play a role in resisting some of these effects. Back to that in a moment.

First thing: grappling uses the hit die of the grappling class for an effect roll. Most spellcasters are 1d6, barbarians are 1d12, monks are 1d8, but also get to add their martial arts damage to grapple rolls in 5E (and Dragon Heresy), which makes a low-level Barbarian/Berserker do 1d12+STR bonuses, while a monk will do 1d8+1d4+STR . . . slightly higher on the average for equal STR. In S&W, it makes more sense to just use the Monk’s “weaponless” damage because that’s what it’s for. They fight unarmed as well as they grapple.

For striking, we sort of want the same thing, but humans are middling strikers and natural grapplers. It’s easiest to drop the die type, and for critical hits that allow rolling your die type twice, this is the better call. So: take the hit die of the class doing the fighting and drop it by a die type. 1d4 drops to 1d3; 2d6 would drop to 2d4 – just deal with the die type.

On a hit, apply the striking damage as control points, but they are bludgeoning or stunning damage, not spendable control points. Grappling and pummeling damage stack normally for effects, which include penalties (in S&W), reduced or limited move, having disadvantage on strikes and being struck with advantage, and incapacitation. 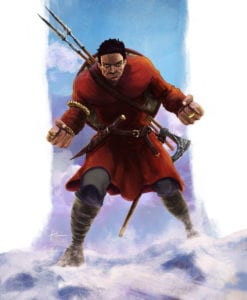 One of the reasons it’s fine to have the grappling damage in control points be so high compared to a fairly unchanging and low control point maximum is that you can shed a grapple by counter-grappling. You attack back, and if successful, you can remove that control damage. I’m going to toss out an optional rule here.

For fisticuffs, we probably want the same thing. Take an “attack” action – and if you have several, Shake it Off only uses one of them – to gather your wits about you and shake off the effects of pummeling or stunning damage. This cannot be used to shed control points due to grapples!

Note: What I really want to do here is make a Constitution saving throw, but the DC of it I’m uncertain about. Going by a midpoint in bonus (0 to +5) and proficiency (+4), a good DC would be about 8+2 or 3 +4, or 14 or 15. Should it be flat? Change with the attacker’s ability? Eh. A DC 15 Constitution save (in 5th Edition and Dragon Heresy) seems about right. Maybe do that instead.

This should provide a bit of ebb and flow. If you’re shrugging off damage, you’re not attacking unless you’re a fighter type with multiple attacks. Have to playtest it and see if it’s fun.

This is easier in Dragon Heresy: for every five points of stunning/pummeling type damage, you take a wound. Shaking off stunning damage does not remove the wound. For S&W, if you roll a natural 20, take damage to HP as well. The lower HP counts make this dangerous.

For Fifth Edition, it’s harder. There are so many hit points, that taking a few is probably not a big deal. They start at 6-15, but rapidly can be dozens to hundreds. So, some options: 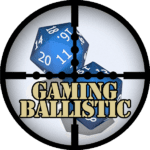 The concept of cool cinematic unarmed fisticuffs adds a nice dimension to fights. In Dragon Heresy, with explicit injury/vigor mechanics, this works really well. Focus on the control scale, with the ability to shake it off, works. Armor absorbing damage works even for the inflated damage rolls of the new system: if plate armor absorbs 8 points per blow, you won’t be getting through it much (and having double DR against fists for all armor would not go amiss either).

But it allows an interplay between fists and face and non-lethal and seriously fun fights without pulling out swords in in appropriate times. The interplay of fists and grapples is nice too, as they rather frequently go together in such fights. Tracking spendable control and stunning in two pools is a bit annoying, but if you’re already using a control point track, then it’s the only new quantity that you have to keep an eye on in play – the rest are done once. Attack roll? Note the bonus and damage, like any other thing.

Have to play it to see if it works, and see where things break down. But at least for Dragon Heresy, this would slot right in. The inflated HP counts of Fifth Edition might require some tweaks as in Adding Injury to Insult. For S&W, the overall lower HP counts mean that accidentally doing injury can be a threat even for 10 HD creatures (55 HP are about typical for this, so a few accidental blows can kill you).

This was a bit off-the-cuff and it’s untested. We’ll see.

One thought on “Unarmed Combat in D&D”