Last night, despite the fact that I had a headache that was grinding on me like a dentist’s drill, I played in our weekly GURPS Ceteri Campaign. Ceteri is effectively a monster-hunting campaign, with a fun cosmology lovingly crafted by Christopher R. Rice, our GM. We’ve just returned to this world after a few jumps to other campaigns, but we’ve got good characters and a good background.

Last night we came across a situation. We’d pretty easily defeated the physical challenges in the encounter (more on that in a later post), and were investigating the source of our issues. A giant tree into which had been carved horrific runes. A demon’s name, and more.

As was typical last night, we leaped before we looked. My character, a paladin in all but name, grabbed a holy water flask and poured it on the tree. It reacted like any sentient evil beacon home would react, and the demon itself manifested. That left us with this: 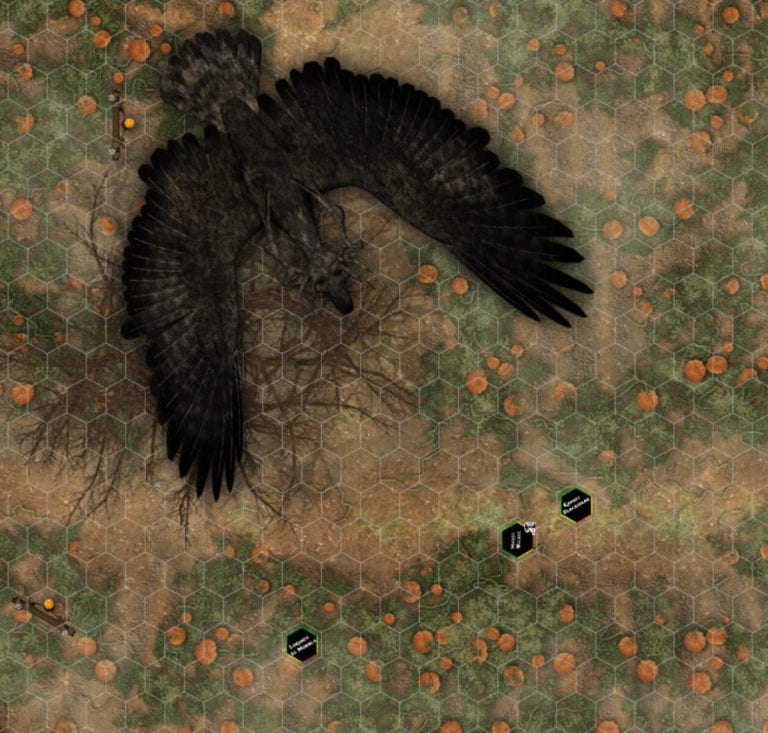 We know pretty much nothing about this creature. We don’t know what it wants, how it fights, or, well, anything. We’d defeated some of its bird-like manifestations, and then fought some scarecrows, learning that other than my Divine Favor (Smite) power, we had not a lick of ability to take on Diffuse/Unliving creatures.

We were screwed. One player started talking about his character, and we realized a few things. But one of those was that he had Danger Sense and a bunch of other prophetic-type stuff that would quite literally have resulted in “I saw this coming.”

Thinking about it, most of us realized that what had happened was actually kind of fun. We said that the game from the point where Gabe (my character) was going to pour the holy water on the tree until the image above was, in fact, a prophetic vision. Kamali (Merlin’s character) then shouted out “Wait! Stop!” and we rewound the situation to that instant.

I was very satisfied with this. Danger Sense is one of those advantages that’s easily forgotten in the heat of play because it’s plot-altering. The player and/or the GM both have to stop, collaborate, and (no, I’m not going there) decide if the advantage applies, how it applies, what sort of warning to give, etc.

But GURPS has other metagame currencies – such as Tactics rolls and Luck rolls. Having Danger Sense be effectively a “do-over!” button that rewinds a scene to an ill-fated or ill-considered decision that would have been interruptable? That’s playable, if annoying. With limits on it set by the GM and accepted by the player, you have what is basically an Omega-13 device.

This lets you undo one decision, probably “per day” (which I’m not as fond of) or “per session” (which I am). It turns it into a leveled disadvantage, too: each 15 points, which is on par with Luck, lets you undo one decision instead of forcing one roll. It’s got a lot in common with Luck (Defensive), and even more so with Precognition (25 points). The two together (Danger Sense and Precog) is 40 points worth of “is this going to be stupidly fatal,” but adjudicating that is hard.

I have to wonder if we should just keep running it that way. The team has to identify a particular inflection point (in this case, when Gabe was about to pour the holy water on the tree). The consequences must be immediate and linear – water makes the demon come. No “Oh, we’re going to rewind five sessions ago” stuff.

But that might be a nice way to keep it out there. You just game through what might happen, and if the immediate consequence is something you might have gotten a whiff of, you ret-con it to that moment.

That’s what we’re doing for Ceteri, by mutual acclamation. Instead of accidentally summoning the demon, we’re going to back off and go into research mode, hopefully containing the evil in the tree by performing a holy and magical ritual. We’ll come back after we actually, you know, know stuff about what we’re fighting.

Oh, About That Smite Thing

Smite is basically an “I Win!” button against certain creatures. When it’s effective, it tends to be very, very effective. We were fighting eight animated scarecrows. They were susceptible to fire, diffuse, fast, and unnatural creatures. 2d of cosmic fire damage was basically a “you dead, boy!” button, and I caught seven of eight crows in the aura radius.

The weasel-word in Smite is “malign supernatural entity.” Problem is, in Ceteri, the amplification that “malign” means “opposed to the belief system of the god to whom you’re praying” is a very, very wide purview for smackdown. Christopher and I are working through that, making Smite cooler in some ways, and more restrictive and less inevitable in others. More on that later, but for now: “I win!” must go.

One thought on “The Danger Sense Ret-Con”