So, my first ever convention as a dealer has come and gone: CONVergence 2019. I’m going to rapid-fire my impressions. I’ll upload pictures later.

So, I’m local, which is one of the reasons I picked this one. But even with that, I have to say: for a new venue, these guys had stuff down cold. It helps that my setup needs were light.

Even so, I showed up with my inventory and booth gear, with hand-truck in the car. Didn’t need it. Pull up to the garage, a staff of folks with pallet jacks show up and whisk your stuff to your booth, you depart and park.

I was the first in line to take-down, too. And when I walked up at exactly 4:01pm and said “I’m ready,” so were they. I was in my car on my way home by 4:15pm. So while more elaborate booths (like the poor folks who brought in a virtual mountain of etched-glass mugs) I’m sure took longer, folks with a limited presence like myself was nearly frictionless. 10/10, can recommend, etc.

Setup for me was, as noted, easy. I was fairly well prepared given I had only six products for sale. 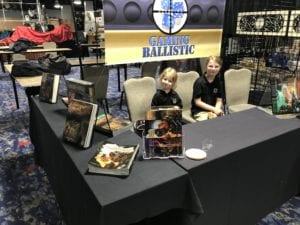 Booth fees were $265, and of course I spent some money getting durable set-up stuff, like inventory stands and a banner.

I was, I believe, one of the only, if not the only, vendors of pure RPG material there. If you wanted gaming stuff, you pretty much chatted with me.

I did, however, give out a LOT of business cards, and made a very important contact at The Source. After the Con, I drove there and I do expect that we’ll start having them stock my stuff. The numbers I was told in terms of “sure, we’ll take X of each” would more than double my sales even at the retail discount. Others might buy shields, though I doubt it – they’re expensive – and still more will browse my store and maybe pick up a PDF or two.

So: financially, break-even to win. Not “wow, I need to do this every month” win. But “did not lose money” win.

Note: this would not be true with an out-of-town convention. Had the same volume been had at GameHole Con or some other place, it would have been a loss. That being said, a dedicated RPG con would have had fewer people just walk by.

Biggest seller, in terms of quantity and funds, for the con? Much to my surprised pleasure, Dragon Heresy hardbacks. I also moved one copy of Lost Hall of Tyr 2nd edition, and a pair of Dungeon Grappling.

As noted, Dragon Heresy is a pretty book with a compelling pitch to those that are open to it. More old-school deadliness, less-silly reliance on hit point ablation, and chock full of viking goodness. I don’t need a high penetration of folks that want just a bit of a different 5e experience to do very well with that product.

I also had the Dungeon Fantasy RPG on display, but not for sale. Mostly so I could point to Nordvorn and Hall of Judgment and Fantastic Dungeon Grappling and say “THESE go with THIS.”

I could probably have sold a lot of memberships to Asfolk while I was there, had I had cards. I did break even, or make money, so that’s a win. Getting there, setting up, running the booth, and teardown were easy and were not an obstacle to fun.

I spent a lot of time on Saturday painting my most-authentic viking shield with milk-based white paint. This drew much interest and good conversation was had. Doing it dressed in authentic mail lent a degree of cosplay and “I’m one of you” authenticity to the thing that was well received, and a few folks even took pictures. Were I to go whole-hog and up my Viking game, it would be well received. 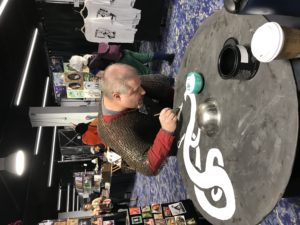 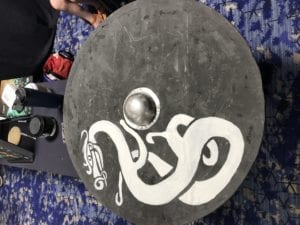 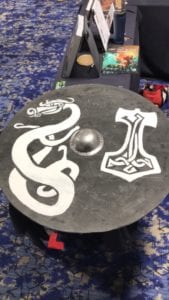 What could be improved for next time?

Overall, the convention was fun. They usually are. I talked games with a lot of folks, painted my shield, sold some stuff, and handed out a lot of cards. I might try Con of the North or another dedicated RPG convention instead of, or in addition to, CONVergence to see if my theories are correct.

Lots of good costume play here, though I didn’t see many full-dress folks from the Manticorian (Manticoran?) Navy – from the Honor Harrington series – there this year like I did last year. Still, some great costumes on display. 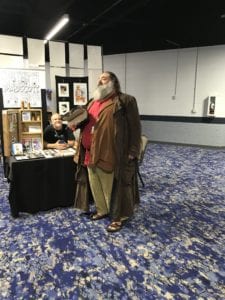 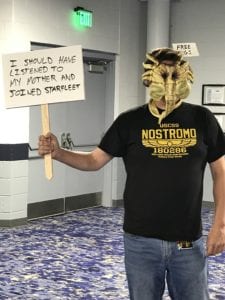 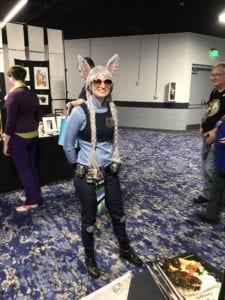 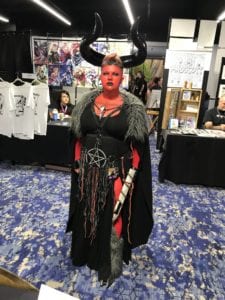 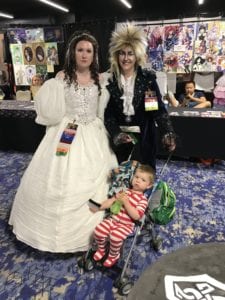 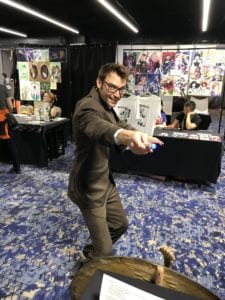 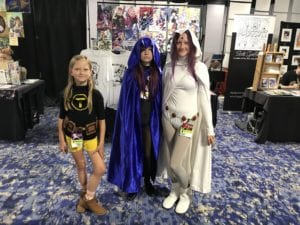 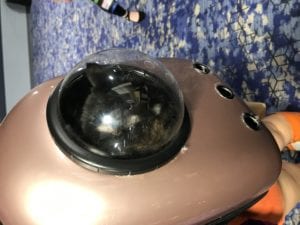