Zephyr gives me a bro-hug for being depressed that he knew Katana when she was four. On the other hand, Yukio is looking at him like “man, you’re insane. She rubs my belly, she smells good, whats your problem?”

We look through stuff, and as we’re working the place over, we find a bunch of boxes labeled KB-109. Bunch of parts that look like a robotic spider. We look it up. It’s an autonomous sentry robot, developed sometime in 2020 as a means to counter the vampire threat. They were controlled by some sort of neural link device. We get to see a guy in a battlesuit with about 30 of these things tearing into a small mob of vampires. The bots are moving at something like 22mph.

Zephyr wants to let Yukio control it. This seems like a sub-optimal plan, but hey, why not?

What about Eamon? Well . . . it would still be funnier to give it to Yukio.

We might be influenced by the fact that we know Ezekiel has papers on kyberian energy to write. The GM reminds us that only Ezekiel is confirmed to make it back. We sober up.

We gather supplies and set up a mobile, self-aware, gun-toting perimeter defense of spiders. What could go wrong?

Maria spends about eight hours coming up with a way to restore our powers. She’s going to need some stuff. Ezekiel first rolls an 18, then blows five karm

a to turn it into a natural 3.  We build a sensory deprivation chamber and Zeke manages to figure out how to electroplate orichalcum. Anyway, about 22 hours after we come back to the base, we have a functional power-bringer-backer.

Zephyr and I decide we’ll both go at once. It’s sensory deprivation, we’ve got a ton of karma burned, and we both should be able to control ourselves due to superior martial arts training.

Commander strips down and gets in the chamber; and then Katana slithers in with him. The rest of the team gives the Bucky/Falcon nod of approval.

The Commander controls his body and mind, and swears he can hear Katana’s voice in her head. We get flashes of each others’ lives. Guess this means we’re engaged.

The Commander suddenly finds myself in the facility where I gained my powers in 1999. I can see the wounds on  my body from where I got ambush. I’m wounded, bleeding, I remember I’m dying. Someone comes in with a suitcase, glowing slightly. It’s still glowing purple, almost pulsing. The shining purple liquid infiltrates through my veins, through my body, then something weird happens – a wave of force goes across the room, almost visible. Everything electronic gets knocked out, and the beeping monitor and my own senses feel my heart stop. Then there’s a flash of light, I start glowing, and all of the wounds start healing. The doctors are amazed. Time speeds up, and Katana is next to me again; “this is,” she says, pointing at a shadow of herself, “the first time I went back.”

I wake up, floating in the air above the sensory dep tank. The kyberian energy is flowing through me again. Katana is watching me. This is in the book, isn’t it?

“Everyone needs their fairy tale ending,” she says. She does a few quick teleports, healing each time. 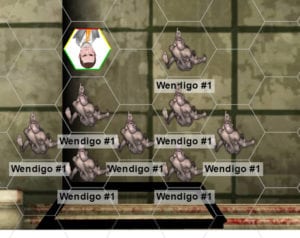 Zephyr’s turn. He goes back and relives the shootout where he saved some kids in a gang shootout, but got shot in the process – that’s clearly where the bullet magnet thing started. He was mistaken for a gang member, charged, processed, and served time. In prison, he was watched out by the gang, and honed his magic, his Kung Fu, and his speed.

Eamon’s turn. Ooops. The machine isn’t working. We set about fixing it. Eamon flashes back to jail again – his powers really went crazy there. He’s staring at a wall, and this is where he found out how to use gravity to detect things. Not like he had anything better to do. From there, he learned to control gravity.

We eventually all get our powers back. We wonder about how to get ourselves back to our time . . . and naturally the perimeter alarm goes off.

Ezekiel fixes up an orichalcum refractor with the 10lbs of spare stuff we have. So . . . we’re ready. 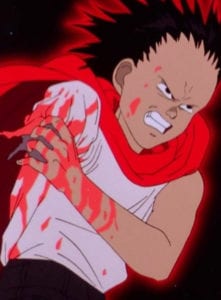 Some Wendigo things invade, bursting into the base from the northeast, and a heck of a lot more from the south. One of them rips Eamon’s arm off. This puts a crimp in his style. He gets so mad he does an ultra-power stunt and crushes all those before him. All of them.

We actually make ridiculously short work of the Wendigos, including ending on slicing off one head, then TK pushing him into the other – Wendigo into the corner pocket.

We all flee into the force field. Katana says she wants to go back, but shouldn’t. But she’ll come back if I ask.

We awake under bright lights in hospital beds. Eamon’s arm is still missing. We’re not actually in a hospital. A guy with a gravelly voice says “I’m surprised you’re still alive, but I’m not surprised to find you here.”

We sit up, and it’s Director Legend – in a temporary room in Yankee stadium. We are told we’ve been gone for four months, and unconscious for two more. Galatea was found and back helping the team in NYC; Galatea managed to save the team, too. Someone fired several missiles at the plane.

We ask about the status of the vampire we recovered? The tube? What tube?

Oh, and Katana? Right next to me. We’re all good.

We try to grow Eamon’s arm back. It don’t work.